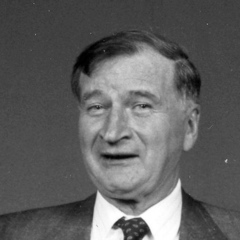 I worked for seven publishers during my three decades in Canadian daily journalism. Pat O’Callaghan was my favourite. I liked him best because he supported independent reporting and refused to kowtow to politicians or business leaders. He even refused to be beholden to his own bosses. During his three decades in Canadian journalism, this Irish-born renegade ran chain papers in Red Deer, Windsor, Edmonton and Calgary, all the time “cheerfully overlooking that the newspapers were owned by others.”

We knew him by reputation long before he arrived in Calgary. In Red Deer and Windsor he had written editorials on the front page under his own byline, reminding readers that a member of their community – not an absentee landlord – was running the day-to-day operations of the paper. In Edmonton, he  transformed the Journal into an extension of his professional Irish persona, colouring the masthead shamrock green, promoting the paper on green-painted billboards, and selling it from green street boxes. What would he do in Calgary? We couldn’t wait to see.

He arrived in July 1982 to replace the retiring Frank Swanson, who had overseen the paper’s move from downtown Calgary to a $70 million plant on a hill overlooking the intersection of Deerfoot and Memorial. We would always refer to this red-brick structure as “the new building,” even after we’d been in there for 20 years. Today the building is up for sale and some of us are still calling it “the new building.” Old habits die hard.

O’Callaghan introduced a succession of changes at the Herald – some whimsical, some farsighted – aimed at making readers (and staff) sit up and take notice.

Among the whimsical was his decision to strike “The” from the masthead of this paper that had been known variously throughout its 100-year existence as The Calgary Herald, The Calgary Daily Herald or, simply, The Herald. O’Callaghan claimed to have a historical justification for his decision to rename it Calgary Herald, but no one could ever find the evidence. The illuminated sign on the west side of the red-brick building kept the design of the old masthead. O’Callaghan couldn’t convince his Southam bosses to spend the money on replacing it.

Among O’Callaghan’s farsighted decisions, applauded by Herald employees with preschool children, was to make the Herald the first paper in Canada with a day-care centre on the premises. O’Callaghan also added Sunday to the paper’s publication schedule (“because we live in a seven-day world”) and switched the Herald from afternoon to morning delivery so that “a minor daily paper in Calgary” would not have the breakfast market all to itself. Herald readers still had the option of saving the paper for afternoon reading, he said.

O’Callaghan banned black-and-white-pictures from the Herald’s front page at a time when the paper’s library of colour photos was much like Old Mother Hubbard’s cupboard. He emboldened his columnists to make their work reflect his philosophy that a newspaper should “never be bland, colourless or gutless.” He launched a Sunday magazine that came with the Herald for six years, and won a few national and regional awards along the way. And all the time, he worked to make the Herald the voice of Alberta. “Politically, we’ve never had a voice,” he said. “How can we when we only have 21 MPs who are swamped in Parliament, and a Senate that’s a joke at best? The only weapon we have is our voice.”

His independence made O’Callaghan a loner. He got no support from the Herald’s Toronto owners when he thundered in print against the National Energy Program. He alienated the Alberta politicians and business leaders who could have become his closest allies. “In this job, sooner or later, someone wants a favour or special treatment,” he said. “So I’ve avoided terribly close friendships.”

His eastern bosses eventually tired of his independence, especially when it started costing them money. They recalled him to Toronto at the end of 1988, when Calgary’s auto dealers started pulling their ads from the Herald to protest a series of stories, written by our great consumer reporter Brock Ketcham, listing suggested retail prices of new vehicles. “A typical swan song for a career that has been studded with a certain amount of controversy,” noted O’Callaghan with a certain pride.

He was then 63. Instead of settling into quiet retirement, he took his typewriter with him to Aurora, Ont. where over the next seven years he churned out a steady stream of freelance columns on Canadian unity, freedom of the press, and other subjects.

His last column appeared in the Globe and Mail on Canada Day, 1996, just one month before he succumbed to heart problems at age 70. The stated subject was Southam’s announced decision to establish its own national news service as an alternative to Canadian Press. The real subject, however, was something close to O’Callaghan’s independent heart.

Recalling that the Southam publishers of his time had always been free to back the political party of their choice, O’Callaghan expressed hope the proposed news service would not result in Southam newspapers singing the same political tune across the land:

“One would like to think than an element of such independence has survived the various crises Southam has passed through in recent years.”

I miss him to this day.